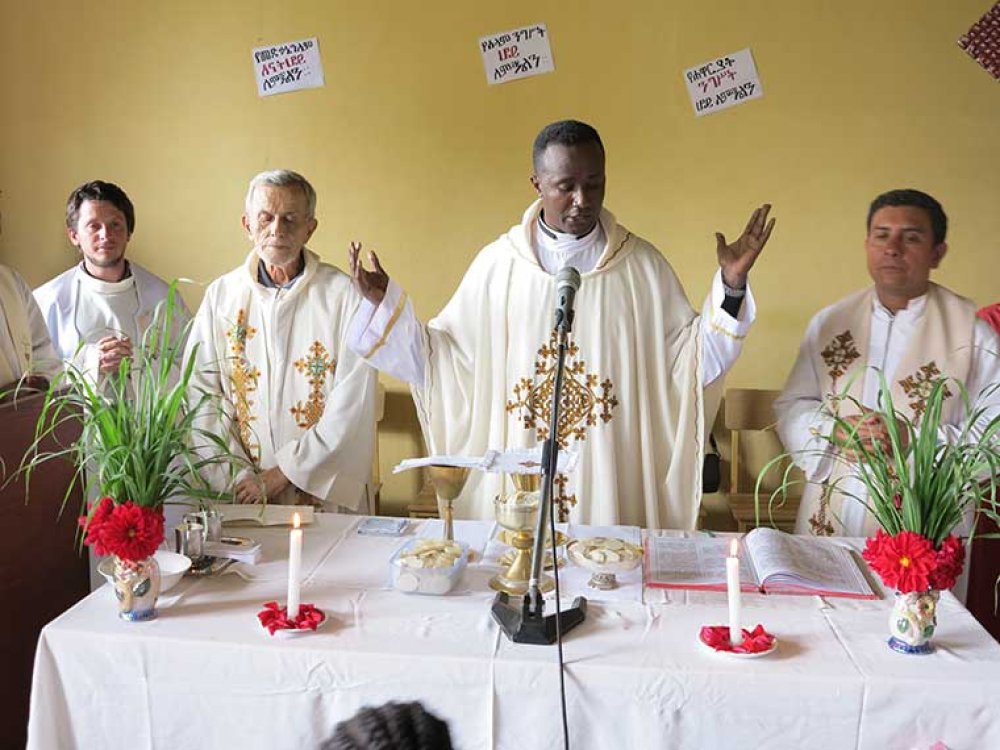 The Priest in charge and the council of the mission of Ropi and its outstations decided to celebrate the feast of Our Lady Consolata, on the 28th June, Sunday.

Ropi is a small village lying some 20 Km south of Halaba Kulito, and is accessible through a gravel road that should have been graded some time ago. During the rainy season it looks wonderful with almost all of its fields covered with green especially maize, but during the dry season it’s another matter, and the clouds of dust in the area are proverbial. To satiate the thirst of its 5000 people and some animals, there are two pumps that work around 4 hours a day. One of them, sponsored some years ago by some donors through the mission, pumps from a bore hole 300 metres deep, with the pump sitting at 270 m. It fills 4 tanks of 10000 litres each, from which people get their daily water.

The main problem actually is that Ropi sits right in the middle of the Rift Valley, that split that runs from the Golan Heights in the north of Israel, through the Red Sea, through most of the Eastern Africa, and ending around the town of Beira, in Moçambique. Now, most of the water throughout the Rift Valley is salty, or having some undesirable chemicals. Here the bad component is “fluoride” and is found in such high concentration that it damages the teeth and the bones in general of those who drink it.

There is a school going up to standard 10. Most of the youngsters finish there, but many drop out before, so as to work in the fields, tend to cattle, etc. There is no industry whatsoever or other activities where to get some income.

Ropi was connected to the national power grid in 2014 but the supply lasted for a week or so. Interrupted for about two months then on for two days and that was all. Apparently there was something faulty with the insulators and an earth leakage led to a short circuit that has led to the indefinite closure of the line.

For the Consolata celebration several people from the 14 outstations of the mission had indicated their willingness to come and celebrate actively the feast of the Patroness. It had been decided to start the celebration by 9:30 so as to give ample time to the faithful to come from the several outstations since the roads during the rainy season become unpassable and it takes longer to reach one’s destination.

So by 9:30 a good crowd had gathered on the compound and the procession was started.

Slowly and led by the active choir made up of the singers from several outstations, and enrobed in their colourful dresses, we proceeded to the Hall where the celebration was to take place.

Definitely this is not Addis Ababa nor an area of Orthodox influence, otherwise it would be impossible to celebrate Mass outside a church / chapel, i.e. a “consecrated” place: in fact throughout the northern half of the country the orthodox influence prevents any such celebrations outside “sacred” places. This same belief divides environment, time and events in sacred / profane. The Old Testament is very much alive around here.

But definitely this is not Amahara territory. In fact we do find and the parish composition is a reflection of that, several tribes. Ropi is at the crossroads in between a number of tribes: Hadias, Kambaata, Wolaita and Oromo, that make up the lion’s share of the faithful, in that order.

The celebration was led by Fr Tamene in Amahric and one catechist was dutifully translating into Hadia. The Hymns were sung in all four languages of the place.

In his homily Fr Tamene stressed the role played by the Virgin Mary in our salvation and how we too are called to listen to God’s words as she did.

The choir led with vibrant hymns but the whole congregation participated actively, singing, clapping hands, jumping and ululating. After the communion the thanksgiving song lasted for 15 minutes and counting!

Fr Tamene took the occasion to have a collection also for the construction of the future Church building here at Ropi: in fact the existing one, although not old has become rather small and the termites have also eaten away part of its walls. Now that a huge church at one of the outstations – Kachachulo – is ready to be inaugurated, the numerous faithful of the area are expecting that at the centre of the mission they too will have a magnificent temple for their worship.

The ceremony ended with a procession with the Blessed Sacrament towards the church. After one round around the church and the final blessing the crowd dispersed, happy to have celebrated the feast of the Patroness of the mission. The day had been cloudy which actually was a blessing otherwise it would have been extremely hot inside the hall.