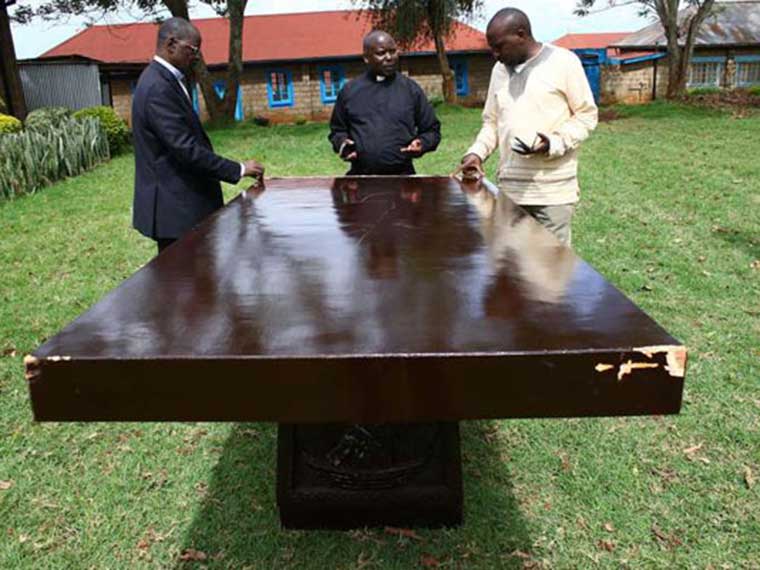 The Pope will celebrate Mass using a 100-year-old altar when he visits next month.

The altar, which will be moved from Nyeri to Nairobi, is the same one that was used during the beatification of Sister Irene Stefani mid-this year.

On Sunday, the team arranging the visit was in Nyeri’s Mathari Consolata Missionary to inspect the altar as preparations for the pope’s visit continue.

Father Stephen Okello, the coordinator of the Pope’s visit, said the altar was selected because it is of rich historical value for the Catholic Church in Kenya.

This, according to the team, is a symbol of missionary connection to the people of Nyeri where the Consolata missionaries began their work.

“We picked the altar, which was made by Consolata missionaries here in Nyeri more than a 100 years ago. This is a symbol that the Pope’s visit touches every Catholic faithful in the country despite the fact that he will visit Nairobi only,” said Fr Okello.

The altar measures eight by six feet. The team said it had also selected the chair that will be used by the Pope, and that the construction of the podium is almost finished.

Out of the over one million worshippers expected to attend the papal Mass, only 200,000 will be allowed into the University of Nairobi grounds.

An overflow of about 300,000 will be at the Central Park and the rest of the congregation will sit at Uhuru Park, where the entire ceremony will be broadcast on big screens.

According to Mr David Omuoyo, the director of communication for the papal visit, more than 500 journalists from all over the world will be allowed into the main venue, with 70 of the practitioners coming from the Vatican-accredited media which travels with the Pope.

“We have received requests for clearance from media houses from across the world but it will be impossible to accommodate all of them,” said Mr Omuoyo.