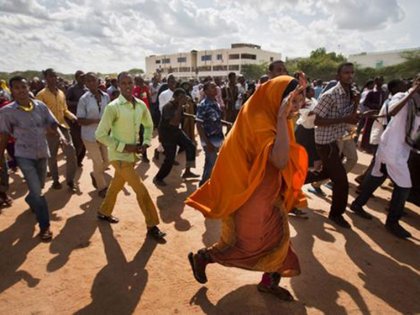 Yes. The story of Cain and Abel keeps repeating. The Christians in the Middle East continue to be massacred, the boy Eduardo de Jesus in Complexo do Alemão in Brazil was killed by military police and 147 students killed in Garissa / Kenya by the radical Islamic group Al-Shabaab. What insane barbarity!

It is the same terrorist group, Al-Shabaab in Somalia, which claimed responsibility for the attack in Kenya Westgate (2013) in which at least 67 people were killed. The war of all against all (Thomas hobbes). Now it has expanded its operations throughout the whole-holy world and built links with other terrorist bands such as Al Qaeda in the Middle East and Bukus haramu in West Africa.

But why all this? How? Until when? I don’t know. This rise more hair and questions than answers. One thing is certainty; there is an authoritarian negligence of the bottom of the pyramid like Garissa / slums. The neoliberal politics of money and power are characterized by social exclusion, gene egoismo and the culture of death. No doubt there is a tie-knot ‘aids’ between terrorism and organized crimes, such as grand corruption and money laundering.

Imagine! Even after being warned of possible attacks by the British and Australian government, the Kenyan authority gave a cold shoulder! May be because the 147 students are poor, Africans, Christians, seen by the world as nothing, pants, the backward, the people always in sufferings / Ebola, no one cares. For that there was no manifestation of politicians and religious leaders condemning this atrocity. This is the culture of indifference that pope Francisco reminded us in Lampedusa. The real deal pope gave us a prophetic toque of welcoming the unknown, the different, and others. I know how it is difficult and challenging, but it is the only way forward on this global google.

Of course, there are fanatics in all social and religious folks. But those who call themselves followers of Islam and do force others to convert or kill are homo patiens. Their nihilism syndrome needs attention, dialogue, but more calls for education, re-learning especial of our ‘nem nem’ generation. That life no matter what, how, how slight, it is beautiful, thus must be protected and respected from womb to tomb.

I hope that these advents will be a lecture conversional for each one and all of us, that terrorism is a global threat. It is more moral and religion problem than a political one. It is a process to undergo, not merely cosmetics solutions. Urgently, we need to gather strength, walk talks, synergy and spiritual unity to stop this barbarism and civilization of horror.

I wish you a happy Easter with a desire to end the death penalty and social exclusion which keeps growing. Happy Easter to all who are daily crucified just by their religion, race or skin color. 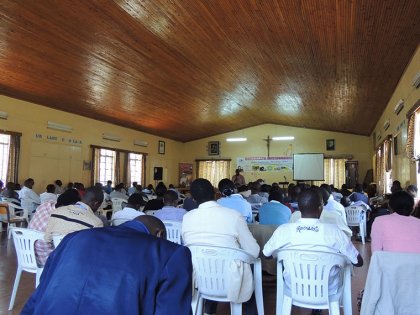 The Inter-Seminary had the presence of more than120 Consolata seminarians currently in the various stages of formation in our Region and a group of young ladies beginning the formative process in the Consolata Sisters. Every day our morning sessions were dedicated to a specific topic with the assistance of a facilitator and group discussions while the afternoons were dedicated to sport activities and the evening dedicated to talent performances.

We began our reflection on the first day, going back to our roots in Kenya, as far as the IMC is concern. We reflected on the Conference of Murang’a and its impact to the Church missionary activity then and today. Fr. Tarcisio Maina, IMC pointed out the extreme importance of the event of Murang’a in a way that it opened the horizons of the Consolata Missionaries from Murang’a to the World.

On the second day of reflection, we focused on the Pastoral challenges of witchcraft and superstition today. Fr. Clemente Majjawa (a professor from the Catholic University of Eastern Africa) assisted us in a reflection that exposed the challenge of some Christians who are involved in superstitious practices or secret societies such as witchcraft and illuminati, though the latter is more common among the youth. In addition to that, there is also the challenge of Church leaders and ministers involving themselves in the same practices.

The third day was dedicated to reflection on Drug Abuse. Paul Ndungu, an Addiction Counselor, shared with us an outlook of the most consumed drugs in Kenya, its effects on human health and the factors that lead people to enter the world of drug abuse. It is not surprising to us that even Church people, such as seminarians, priests and nuns also fall into this vice. Paul concluded the session with his personal testimony. He shared how he entered into drug abuse at the early teenage, how he lived with it for good part of his life undergoing several challenges, how he underwent treatment and managed to get out of it. Today he is a trainer/facilitator and addiction counselor helping other people to come out of the challenge of drug abuse.

The event was a good opportunity to meet our friends of other formation houses, socialize with them and gain some knowledge as far as the challenges facing the new waves of evangelization are concern. 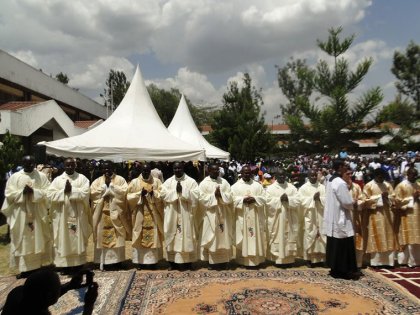 The Lord calls, consecrates and sends us!

The theme chosen for the celebration was, “The Lord calls, consecrates and sends us”, having as reference the year of Consecrated Life, the vocational history and the mission of each ordained.

In a good Kenyan atmosphere where everyone is invited to the celebration, the first guests arrived at the Consolata Institute of Philosophy (local of the celebration) at around 7 am and gradually the place was filled with colors and smiles. At 10 am the smiles and colors intensified with the entrance song that read in Kiswahili “Njoni tumfanyie shangwe Mungu wetu” (come all praise our God). In fact, the mood was of much joy in a procession of more than 150 priests and deacons and an assembly of almost 2000 people. Among the priests were the Superior General of the Consolata Missionaries, as well as his vice and the General Councilor for Africa, who now are in the Kenya-Ugandan Region doing the Canonical Visitation.

The president of the celebration, Bishop Emmanuel Okombo, during his homily, drew attention of those present to the fact that we should not only look for the physical appearance of the new ministers of the Church. Rather, we should be more concerned with what they represent in our midst and what they have to offer us, so that we can all help them to be faithful servants of the Lord. One of the representatives of the newly ordained, during his thanksgiving speech, invited his colleagues in the priestly and diaconal ministry to be humble and be at the service of all. 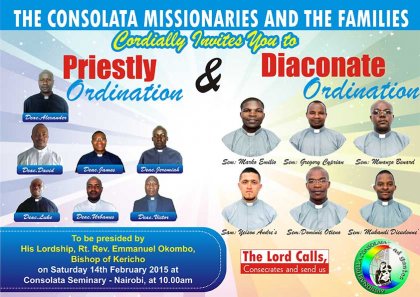 Mission experience and a messa…

Clima: a Parigi il One Planet …